You may hear the superstition that bananas are bad luck on fishing boats. It sometimes seems crazy and funny, but fishers believe in that superstition. It makes you surprises, and you overwhelm that; why are anglers so superstitious about making sure there are no bananas on board the boat while fishing?

Thought Superstitions seems like superstition; it sometimes comes true. So don’t avoid all superstitions that are logical and meaningful. So I try to find out the actual reason for “No bananas on fishing boat.”

We have seriously investigated this banana fishing myth. We took some interviews with anglers and even took bananas on our boat to analysis on this myth.

Taking bananas on the boat is symbolically a bit of bad luck. This superstition is one of the oldest, longest-running, and controversial fishing boat myth out there.

You may laugh at me to hear the fallacy, but you might know that some anglers and boaters swear by rotten luck bananas on board while fishing.

What is behind the ‘No Bananas on a Boat’ Superstition? 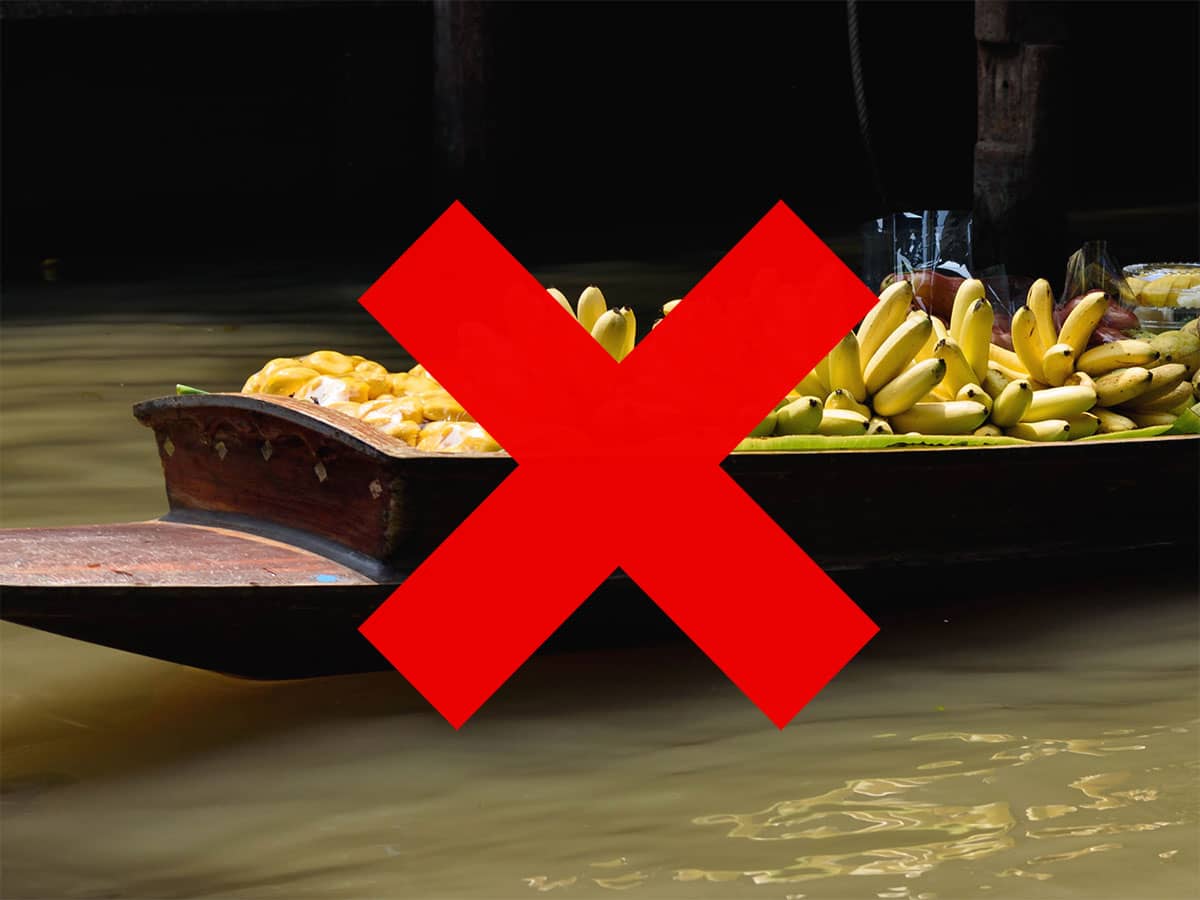 Let’s talk about the facts about the fishing fallacy and bananas on board fishing vessels. It is said that the more serious you are about fishing, the more superstitious you become. Most of the superstitions consist of regional bases. We see that perhaps, fishermen are the most superstitious group, especially in America. A superstition is a bad luck for one region that is a good look for the other side of the world. However, there are so many stories behind it—the most common behind the banana superstition dates back to the 1700s. There many lost or ill-fated ships were noted carrying bananas to their destination. Perhaps because of this incidence, bananas became known as omens of danger and bad luck for boats.

Whatever all kinds of superstitions about fishing and boating approach from the fishermen and they believe.

On the other hand, we heard to stick around until the end, as there are some logical and illogical banana stories from anglers. It will be a wonder to know that there were over 1,000 bananas on the Titanic the day it sank. Yeah, don’t be surprised. We get some information such as actual Banana facts; at least 1,000 bananas sank with the mighty Titanic. Don’t ask why they carry bananas on this ship? The answer is there were over 3,000 people on board the Titanic. Some of them are the world’s wealthiest citizens. They would demand every type of fruit was on board, including delicious bananas too. So the fact is that the banana is responsible for sinking the Titanic. It’s just coincident with this sad story. Don’t believe that a thousand bananas can’t be accountable for taking down an entire ship.

Before jumping into some craziest bad luck banana stories, we should know that any other fruit, vegetable, or superstition out there combined. Make sure you know the story behind bananas being lousy luck on a fishing boat.

There are top 6 reasons why so many people swear that bananas are bad luck on boats.

The first reason to haven’t bananas on your fishing boat:

Carrying bananas on the fishing boat seems like lousy luck from ancient times.

Loads of Spiders can be a specific reason for it.

As spiders love bananas, they were loaded with the small spider whenever the shiploads of bananas were loaded.

That’s why the houses on the side of banana trees are full of spiders as it likes bananas. Those are mostly active at night time. If the sailors are carrying the banana cargo in the evening, they get bitten by those poisonous spiders. And it may take the sailor’s life because of toxic spiders. And this, this rumor could spread that banana is terrible luck on a boat.

The second reason to haven’t bananas on your boat is “The smoking floating gun – bananas.”

In the ancient time, about the 1700s and 1800s, there wasn’t any coast guard and sea tow. Even high- frequency radio or cell phones want on those periods to call in for help. In this situation, when a ship went down, it went down without anyone knowing.

After the distress, when other vessels were passing through the same channels found many of that shipwreck. And they only find those bananas floating on the water! When another ship came up to the spot, they only saw many bananas floating with the other garbage. Thus they believed that those curse bananas are the main culprit for this misfortune. And this rumor spread all over through the sailors who came across the sunken ship. They share the story about the sunken boat caused by floating bananas.

The third reason to haven’t bananas on your fishing boat is – Stinky bananas.

Have you ever noticed the smell of bananas that are leftover for a week? It smells horrible.

I had an experience one time that I went away to my cousin’s home for two weeks. After coming home, I notice a disgusting smell in my whole room. I check the garbage basket, refrigerator, and all sides of my room but don’t find the smell source. Finally, I discovered the rotten bananas on my table, which create an unbearable smell. It smelled like something had died and rotten on my house. Those two rotten bananas make this horrible situation. You know banana is a portion of quickly terrible food, and even you cannot preserve it for a long time.

Let’s explain. When a boat carries a lot of bananas, speed was the key. The sailors might know that they only had a few days before the bananas would go wrong, which meant their ship would be valueless.

On the other hand, there are many reasons those don’t have as planned on the sea that could delay your boat journey. Such as a terrible storm, huge waves, getting lost at night due to the mist, or the captain falling asleep at the helm, also known as passing out after a little bit of drink), are various reasons. In that situation, your bananas on board began putting off an odor.

So you should know that the odor of rotten bananas put out doesn’t just make your nose twitch. It can also spoil other fresh food because the smell speeds up quickly and makes other fresh food and produces terrible.

When you would be out at sea longer than expected, you need more food and space for that time than take that kind of product that could not be rotten easily. Yet the bad bananas can affect off much of their existing food supply. Many times the sailor ran out of food. And if they were there at sea long enough, it could mean death. That’s why people believe in the “No bananas on boat” superstition.

The fourth reason to haven’t bananas on a fishing boat –

Most of Africa and the Caribbean’s affluent banana areas had lots of destructive wood eating termites in the world. When these termites would cling to the banana trees, and those bananas had already loaded on the ship, then these termites realize that they are now in a widen cargo hold. It is like the candy store for them. Thus they were causing tons of damage and eating holes in the hull that were not repairable.

For this incident, the sailor wanted to blame the banana, and it again becomes the main culprit.

The fifth reason to have not bananas on your fishing boat

It’s another fact that the cargo sailors like to fishing while they are in the ocean.

They took much time on their fishing and needed a break to catch fish even they did quite well.

But in “Banana boat,” they need to go ahead at full speed and can’t take a break.

So what happens finally?

Crew members discuss with other members from other boats about their observation. And they again blame banana boats that don’t catch fish. This is a rumor born again and spread again. Because the sailor is the eye witness of the incident, others also believe the myth.

Sixth reason to haven’t bananas on your fishing boat – Fire!!!!

Yes, something those rotten luck bananas causing fire on boats.

Let’s know the actual cause.

We learned from the article that bananas would ripen and rotten too quickly. It soon begins to ferment under hot moist. A new sailor struck different types of fruits and food which they had never before. Then they store those items in the large boxes of bananas into the holds of ships. Thus they create a horrible situation without any knowing. For the fermenting bananas, bilge fires would erupt and spoil everything, and in this time, the bananas again are the proven culprit. But it is a lame reason, and you don’t need to believe this lame logic.

At the end of the myth

Whatever you believe in superstition or not, you cannot ignore it from this point of view. And it was hard to ignore the crazy amount of fishing because the ocean is still mysterious. Most of the time, the sailor and the fishermen have faith in the “No banana on boat” myth. And that’s the reason still now they avoided bananas on their fishing boat. Besides, when anglers don’t get more fish according to their expectation, they believe in superstition. So it is also simple to see how easy these rumors of bananas being lousy luck on fishing boats and can spread out of control.

Tell us what your bad luck story is?