If you are a nature lover, then you must be fascinated by the various types of animals in our ecosystem, right? One such animal is flying fish or flying cod. It’s a special type of fish that can “fly”.

If you have never heard of this type of fish before, you should look into this discussion right now. It’s because, here, we have explained why this fish is called the “flying fish” and how it lives its livelihood.

To find the detailed answer to this question, you have to take a deep dive into this discussion. So, let’s go!

Flying Fish: What Are They?

The flying fish is also referred to as the flying cod. And, this fish belongs to a family of ray fin marine fish. In terms of habitats, these fish are usually found in warm climates and tropical waters. Also, this fish can be found all over the world’s oceans.

Now, the specialty of this particular fish is that they have specially designed fins that look like the wings of birds. More importantly, what’s even more surprising about these fish is that they can actually use these fins to glide over the water.

Yes, you heard me right. These fish can actually jump out of the water surface and glide over the water body for up to 650 ft. It’s amazing, right? Any animal that can glide that far wouldn’t strike you as a fish, right?

Well, for the flying fish, covering this much distance in one leap is a piece of cake. But, you might ask what exactly the reason is for their flying. The answer to this question is that they fly in large groups and glide above the water surface in order to avoid being caught by predators.

Furthermore, you’d be surprised to know that some of these flying fish can perform up to 12 successive rounds of gliding in one go. And, this phenomenon, in turn, makes it look like this fish can actually fly.

However, remember that all that these fish do is just glide over the water. So, they do not actually fly as birds do.

What Do Flying Fish Eat?

The first thing to note about flying fish is that they are completely omnivorous. That means they can eat all types of food, including meat and vegetation.

Now, if we have to be more specific, we’ll have to say that the flying fish mostly eat plankton from the water. However, they also eat smaller crustacean insects and smaller fishes as well. 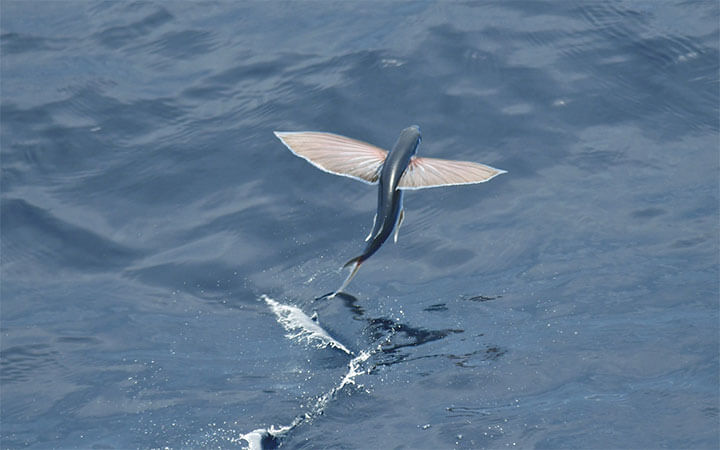 What’s more, although you might think that these fish eat their food from above the water, the flying fish have their meals underwater. That means, although they are called flying fish, they do not really rely on the food supply from the surface world.

Rather, they eat crustacean insects and other smaller fish from the underwater ecosystem.

What Does Largemouth Bass Eat?

What Do Smallmouth Bass Eat?

What Animals Eat The Flying Fish?

As the flying fish are very small in size, they are also preyed upon by other animals. Although these fish fly really fast in order to keep protected from predators, they get frequently hunted by porpoises, birds, marlins, squids, tuna, humans, etc.

However, it is not common to see larger animals such as whales eating these fish.

Flying fish have multiple fins that facilitate them to glide over large distances. And, depending on the number of fins they have, they can be generally classified into 3 groups:

The typical feature of this particular flying fish is that they have 2 wings. That means they fly or glide over the water relying on two fins. And, this type of flying fish can be frequently found in the Atlantic and the Pacific Oceans.

Furthermore, another distinguishable trait of this species of fish is that they are frequently found in the Caribbean seas.

The Population And Habitats Of Flying Fish:

Although flying fishes are found all over the world’s oceans, they are most frequently found in warm waters. For example, you’ll commonly see flying fish roaming around in the waters of the Atlantic, Pacific, and the Indian Ocean.

Now, you might ask, “why are they not found in the Arctic Ocean or Antarctica?”.  It’s because these fish depend heavily on the movement of the fins. Thus, they cannot function properly in a cold climate due to the fact that a low temperature disturbs their muscular function. As a result, flying fish are most commonly found only in warm waters.

Also, you would be surprised to know that these fish are so common in Caribbean waters that some countries have flying fish symbols in their national flags (such as Barbados).

In terms of population, the number of flying fish in the world’s ocean has been staying stable for the past few decades. It’s because these fish are not commercially viable to hunt down (due to the fact that these are hard to catch in fishing nets). And, because these fish are abundantly found in the ocean, the IUCN has regarded the flying fish as “not endangered by humans”.

The flying fish cannot actually fly as birds do. Meaning, they cannot use their fins to gain altitude by flapping. Instead, what the flying fish can do is they can glide over large distances by jumping out of the water, which makes it look like they’re flying.

On average, flying fish are seen to conduct flights for up to half a minute. However, the highest duration a flying fish has been seen to glide is about 45 seconds. And, it’s worth mentioning here that these fish cannot breathe in air, so their ability to stay above the water is very much limited.

Yes, definitely. In fact, flying fish are commonly used to make various types of cuisines. And, in Caribbean countries, eating dishes made of flying fish on a daily basis is very common as well.

Like most sea animals, flying fish are also attracted to bright light. That’s why, at night, fishermen used light lamps to attract flying fish into their fishing nets. Thus, using this technique, it is possible to catch a huge amount of flying fish at a time.

The average speed of flying fish above the water is around 3 ft per second. And, you will be shocked to know that flying fish vibrate and flap their tail 70 times a second in order to gain speed when jumping out of the water.

The bottom line of this discussion is that flying fish, like all other sea animals, are magnificent creatures. As they have a unique bodily physique, in their time of flight, they can sometimes trick humans into thinking that they are birds.

Therefore, if you ever get to see flying fish with your own eyes, we recommend that you enjoy watching the magical creature doing its magic above the water. And, don’t forget to take a photo as well. Best of luck!!