Pistol shrimp don’t come with a vibrant color outlook like mantis shrimp. Even, they’re not as large as mantis shrimp. So, in case of an attack by predators, pistol shrimps are in a safer position. Let’s have a look at the detailed comparison to know more about these ocean shrimps. 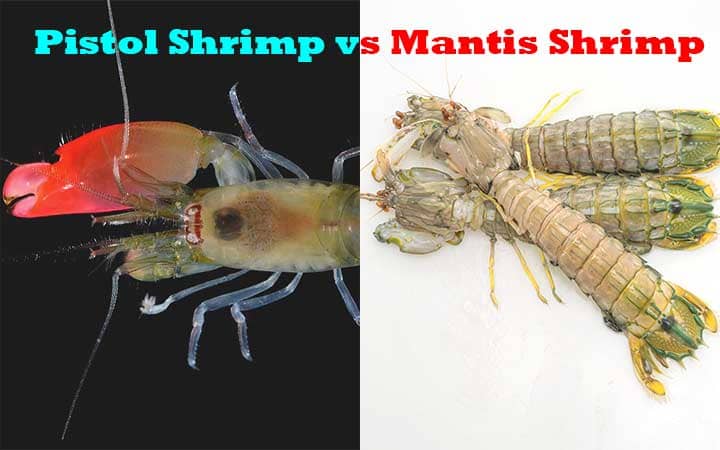 Depending on the various characteristics, there are a lot of distinctions between pistol shrimp vs mantis shrimp. Some of the top distinctions are depicted in the following comparison chart.

This section is designed with a few important questions about pistol shrimp and mantis shrimp. To distinguish between them, go through the answers.

Do both shrimps have a similar body appearance?

Pistol shrimps and mantis shrimps have separate body colors. The bright orange/brown color like the clownfish is present in the pistol shrimp’s body. They have legs with light blue color and there is no natural body marking on them.

On the flip side, mantis shrimps have a great color combination of olive color and white color. Their antennae are designed with colored orange scales at a specific distance. The pattern of the leopard seems similar to mantis shrimps.

Pistol shrimp or mantis shrimp- who is pro at hunting?

After visualizing the prey, pistol shrimps load their pincer. They hit it when the victim comes very near. The enemy gets knocked by the powerful bubble of the water.

A mantis shrimp moves extremely fast to hunt its predators. It attacks the predator with the strong dactyl clubs which are at the front part of its body. This spring-loaded attacking mechanism helps to implement more than 1500 newtons force on the hunt.

Pistol shrimp vs mantis shrimp: which one is powerful?

Besides, mantis shrimps come with a sturdy build that keeps them forward while fighting. Their aggressive instinct makes them more powerful to the opponent. Along with the larger size advantage, mantis shrimps are also powerful in other factors.

Do both shrimps live in a similar area?

Both pistol shrimps and mantis shrimps have their separate living area. Pistol shrimps prefer coral reef areas to build their colonies. They love to spread their numbers and collect food in the temperate sea waters.

But, mantis shrimps are different because they live in tropical and subtropical waters. Most of the time, they are found in the Indian and Pacific oceans between Eastern Africa and Hawaii. Depending on the food availability, weather conditions, and others, their living strategy gets changed. They can cope with any other shrimp colony as they’re the strongest type of shrimp.

Is the food habit of pistol shrimp different from mantis shrimp?

Pistol shrimps rely on small invertebrates. Along with this, they eat detritus and macroalgae. Pistol shrimps follow the friendship strategy to goby. Their symbiotic relationship helps to bring some food to pistol shrimps.

On the contrary, mantis shrimps live by eating fish, small crabs, and other shrimps. Even, they eat their species when they’re out of food for a long time. As they have a quick attacking strategy and sturdy body, they can dominate on various sea lives.

Which shrimp comes with a better vision capacity?

Pistol shrimps have dull eye power. They barely can identify various colors. Their eyes aren’t developed with photoreceptors. But, mantis shrimps come with the vision of identifying 12 different colors.

Do pistol shrimp and mantis shrimp have similar predators?

Pistol shrimp or mantis shrimp: which one has a better defending style?

Mantis shrimp’s defending style is better than pistol shrimps. Pistol shrimps use their large claws as the main defense weapon. The claws produce large bubbles with heat, light, and sound. Sometimes, the claws get damaged and they automatically grow up after a certain time.

Mantis shrimps use their pincers to defend themselves. They release high-pressure punches and make the hunt weaker. These pincers get transformed into articulated raptorial arms after a few days. For both attacking and defending purposes, mantis shrimps use them.

At this part, you’ll get some common questions on pistol shrimp and mantis shrimp along with the answers.

Is a pistol shrimp a type of mantis shrimp?

The answer is partial “yes” because both shrimps are included as crustaceans creatures. But, they’re completely different from each other. A pistol shrimp is smaller in height and has some shortage of color combinations. Mantis shrimps look colorful with their pale green hue.

Are pistol shrimps the strongest?

No, pistol shrimps are less stronger than mantis shrimps. Mantis shrimps come with a larger body and powerful claws. They can easily dominate pistol shrimps at any corner of the ocean. Along with their ultra-fast movement, they pack the strongest punch.

Can a mantis shrimp break your finger?

What shrimp is the most powerful?

Mantis shrimp is the most powerful of over 300 species of shrimp. Their super-fast attacking capability can knock the arm of a crab just within a second. Even, they’re capable of breaking the snail shell easily. In some cases, they win the fight against octopuses and squids.

Can a pistol shrimp hurt you?

A pistol shrimp is small enough to hurt you directly. But, it can hurt you with its allergy attack. People usually die by anaphylaxis shock due to a pistol shrimp. You can also die from choking on one. Therefore, a pistol shrimp can somehow hurt you.

Carp vs Tilapia: Which Is Better In Comparison?

Carp vs Koi: Know Their Dissimilarities

Comparison Between Carp vs Catfish

After going through this writing, you’ve gained much knowledge on the comparison between pistol shrimp vs mantis shrimp. They come with individual color, height, and body structure. Though both of them are edible, they are naturally different.

A pistol shrimp isn’t attractive and large enough. Therefore, you have less possibility of being attacked by it. On the flip side, a mantis shrimp has a bunch of predators including humans. For their long body structure and powerful attacking strategy, they’re slightly dangerous.

Moreover, their eyesight is much different as the hunting capability and strategy aren’t similar. For their different food habits, their habitat is different. These two shrimps can’t stay together as mantis shrimp can easily knock the pistol shrimp. Once you understand all their major distinctions, you can easily choose according to your criteria.