The spawning process of carp can take a few days up to one or two weeks. The spawn tenure of the carp entirely depends on various factors. Like, the breed of the carp, the genetic information, age of the carp, water temperature level, reservoir capacity, and lastly, the season.

Generally, carps become ready for intercourse at the age of two years. Along with that, it also tends to lay eggs or spawn. After that, it takes several days to complete the spawn fully. And spring is the golden time that urges the carp to spawn. More precisely, the water temperature is required to be above 18 celsius.

Today we shall surf through every nook and cranny of the dictionary of the spawn of a female carp, advantageous sites, pitfalls, caring process to spawn artificially, and other related information.

We will know everything, such as the advantages and disadvantages of spawning and what you must understand about spawning. And how to do fishing during spawning and loads more.

Advantages And Disadvantages of Spawning

Now we know what is spawning. Spawning is one type of reproduction. Spawning is a natural process that helps to increase the number of all kinds of fish species.

It helps to increase genetic variations. It increases the chances that fertilization will occur. This means that a significant number of embryos will be able to escape predators.

Most aquatic animals, except for reptiles and aquatic mammals, reproduce through the process of spawning.

Spawning is a part of the life cycle. It produces food for other animals in the food chain. 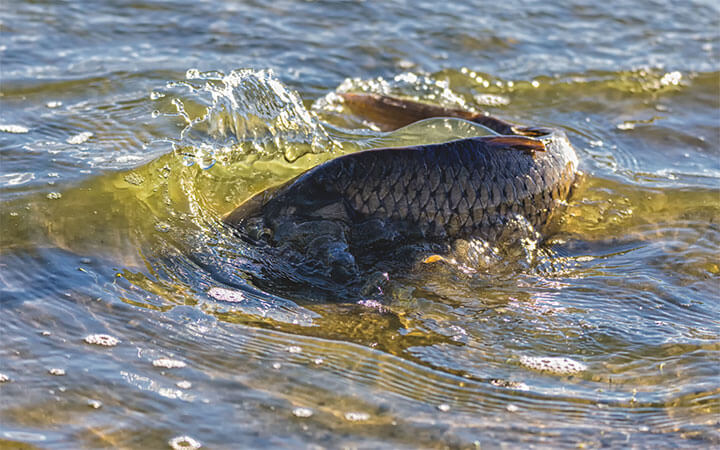 It is true that spawning is helpful for life; however, it has some side effects to carps. For instance, it makes carp and other species of fish weaker.

Spawning requires a lot of energy. As a result, you will find that many older carps or other species of fish die after spawning.

Some Facts About Spawning

Let’s give you a brief description of what occurs during spawning. During this period, eggs, as well as sperms, are released. And the eggs and sperm fertilize to form embryos.

And in this process, both eggs and sperm from both sexes are released in bulk, so the number of offerings produced is enormous. Another name for spawning is external fertilization.

There are many alternative ways of spawning, which depend on many factors.

Things You Must Know About Carps Spawning

Spawning is an essential process in increasing the number of carps. So it is necessary to maintain certain factors; also, you need to avoid many things during this period. Here’s the list of the things you have to do and things you have to avoid.

However, it isn’t an easy task to keep the temperature of the water constant. It will take months. But if the water temperature fluctuates a lot, the process will slow down.

Spawning is a natural process, and it’s our duty that we don’t interrupt it. Many people fish during the spawning period, which isn’t good. You must allow the carps to spawn as long as possible.

If possible, make a barrier around the lake so that people can know that the carps are spawning. Awareness is the key to this problem.

Remove potential algae blooms that might cause harm to the carp. Make sure that no one throws any sort of litter into the lake.

Last but not least, make sure you don’t use any sort of chemicals. Some people tend to use chemicals in order to fasten the rate of spawning.

It might cause the carp to die. You have to be extra careful during this period as carp becomes weak.

Ways To Carry On Fishing During Spawning Season

Of course, it isn’t possible to stop fishing for a few months. You can follow some techniques to promote healthy carp fishing during the spawning season.

Normally spawning carp start to behave in a different way just before they are about to go to spawn. There is a way you can try to know whether carp are ready to spawn.

If you have a typical lake where you go fishing regularly, you will see that the bites may start to slow up. And the carp are behaving in a different way. Once carp start spawning, they lose their interest in feeding.

In most cases, you will find carp in weedy as well as in shallow areas of the lake in large shoals.

Many people don’t know that carp are cold-blooded. Their metabolism slows down if the temperature is below 3.9 degrees centigrade. The ideal temperature to feed them is between 10 and 18 degrees celsius.

If the water temperature is over 18 degrees centigrade, it will be too hot for carp. And they will tend to switch off feeding because water won’t be able to hold enough oxygen for carp.

As mentioned earlier, during or after spawning, carp can be weaker. However, there is no direct proof that spawning can cause carp to die. As carp become more fragile, they may be more susceptible to the slightest change in their environment.

For example, a potential algae bloom can occur after their health or oxygen depletion in the water. At times carps tend to injure themselves during spawning.

Carp usually spawn between March and June. This is known as a close session. However, some waters don’t allow close seasons. So carps spawn early in the year or later in the year, depending on the climatic condition.

Hopefully, we have cleared all the doubts you had regarding how long do carps spawn for. We have discussed every question regarding spawning in detail. Now you are aware of what to do and what not to do during this period.

Make sure you don’t forget to inform your fellow partners of all the things you know about spawning.