Kayaking is an adventurous sport and an excellent form of physical exercise and mental refreshment. Kayak is very different from a boat. The areas around the body of water that you cannot reach with a boat, you can wander around with a kayak. It is an apt medium, especially while exploring the ocean.

Why Kayaking In the Ocean and Encountering Sharks

An ocean has many mysterious areas that are hard to explore with even a boat, forget ships, and other mediums. Paddling the tapered kayak through the crevices around the ocean is easy. However, the sea is not a very safe place for kayakers. The sea predators are everywhere around. One such dangerous species is the vicious giant shark, but that doesn’t stop the kayak freaks from diving and kayaking into the ocean. Therefore, we are going to discuss what every kayaker needs to know about sharks as our central objective.

Do sharks attack kayaks? Sharks are the biggest fear for the kayakers. It is a dangerous species, which attacks humans without any provocation. However, the fear is too intense and somewhat unnecessary, considering the actual attacks done by the sharks. Unprovoked shark attacks seldom happen. In a year, not more than 100. That, too, all over the world. Last year the number was just 64. Adding the provoked cases will increase the number, of course, but not to a great extent. So, you kayakers are pretty much safe, till the time you keep yourself away from any interaction and then provocation with a shark. It is not fun. 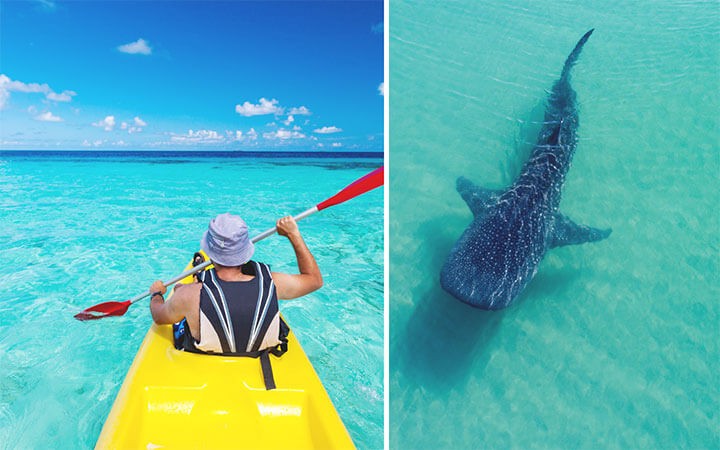 The word provocation might have compelled you to wonder who will provoke such a beast in their right mind. Though kayakers are not among those groups who willingly instigate the shark, some people are there who kill them. Most of the time, sharks attack humans out of defense, thinking they are going to be attacked or killed. For you, it’s just swimming and kayaking without disturbing the marine creature, but for them, you are invading their territory, perhaps for hunting the dorsal fins. One hundred million sharks are killed every year for that pricey and high-in-demand fin. A mere 100 shark attacks on humans and a whopping 100 million human attacks on sharks- do your calculations. Without a dorsal fin, a shark might survive, but not for a long time. So, it is always better to know about the areas where sharks are seen and avoid them, no matter how low the chances of shark attacks are. To be honest, you never know.

We all have, for a long time, believed sharks are only interested in human blood. They lurk around the ocean and wait for a human to cut his or her fingers and drop a few drops in the sea. And voila! Dinner is ready for the shark. No, not really. Sharks are rather attracted to amino acids and oils, but those have to be of the marine creatures. In some rare cases, a huge amount of blood might eventually catch the attention of a shark. But that is highly unlikely. Because more than the eyes, sharks depend on their nose. The smell is sharks’ primary sense. When they smell amino acids and oils of fishes in the ocean, they start following the odor and search for their food. That doesn’t mean you will swim in the sea with a massive cut and blood gushing from your body. Get some dressing, please? To remind you, salt in the wound hurts hard.

There are a total of 440 shark species in the world. Not all of them are massive in size or deadliest. Among all the species, the three most dangerous sharks are the white sharks, tiger sharks, and bull sharks.

Sharks are superior to humans, not only in might but senses as well. Humans have five senses, and the sharks have eight. They have all the senses that a human has. They smell, hear, see, feel the touch, and can taste. Though the sense of smell is the most prominent in them, the sound is no less. They can easily hear the sounds of a person swimming in the ocean or a wounded fish groaning. Their unique sensory system also includes sensing shock waves and electricity called lateral line and electro sense, respectively. Other than that, sharks have two oversized denticles with neural hair cells in the bottom known as pit organs for sensing water currents. So, no matter how cautiously you provoke or hide from them, the chances of them getting you are always more.

If you thought sharks are a saltwater giant, you were wrong. One of the deadliest sharks loves to venture into freshwater. We are talking about the Bull Sharks. These are seen swimming in the coasts, in shallow water. People mostly prefer swimming in shallow water, and if somehow any of your gestures attracts those deadly brutes, you are in grave danger. So, beware.

Eye for an Eye

It is highly unlikely, once in a blue moon incident, but god forbid that if a shark somehow attacks you and the attack is pretty intense, do not try to hurt the shark randomly. Rather, target the eye. The moment you punch or stab in the eye, it almost freezes and stops what it was previously doing, or it was supposed to do. High chances are there that it will open its mouth and leave you. A sharp tool with a bit of calmness and concentration will save the day for you. So, when you pack your things for kayaking, have something pointed in your pocket.

What Size Kayak Do I Need?

What Size Kayak Paddle Do I Need?

What Should You Do When Approaching a Low-Head Dam in a Canoe or Kayak?

With dressing up properly, taking all the essentials, and staying alert, you can kayak, leaving all the inhibitions. Keep in mind, no matter how much experience and efficiency you possess in kayaking, never go for kayaking alone. Stay in the group or take someone as efficient as you are if you are going as a pair. Keep your safe distance from the sharks. Taking life risks is never the motive of kayaking. Be safe and have fun is the motto. So, maintain that wholeheartedly.