The Great Salt Lake in the state of Utah is the largest saltwater lake in the Western Hemisphere and one of the most iconic landmarks. The lake is nearly four times as salty as the ocean and is home to a distinctive ecosystem supporting various plant and animal life. In addition to its natural beauty, the Great Salt Lake is also a vital economic resource for Utah.

About the Great Salt Lake

As the rivers flow into the lake, they deposit large amounts of salt and other minerals. Over time, evaporation has left these minerals behind, creating a dense concentration of salt in the lake water that resulted in the formation of a large inland sea.

The water is dense and buoyant, and swimming in it is incredibly liberating. However, the salt also makes the lake a harsh environment for most plants and animals. The only living things that thrive in the Great Salt Lake are brine shrimp, brine flies, and algae. The lake is also home to many birds that feed on shrimp and brine flies.

Are There Fish in Salt Lake?

The lake is relatively shallow, and the water is very salty. As a result, fish cannot survive in the lake. However, some organisms can be found in the lake. 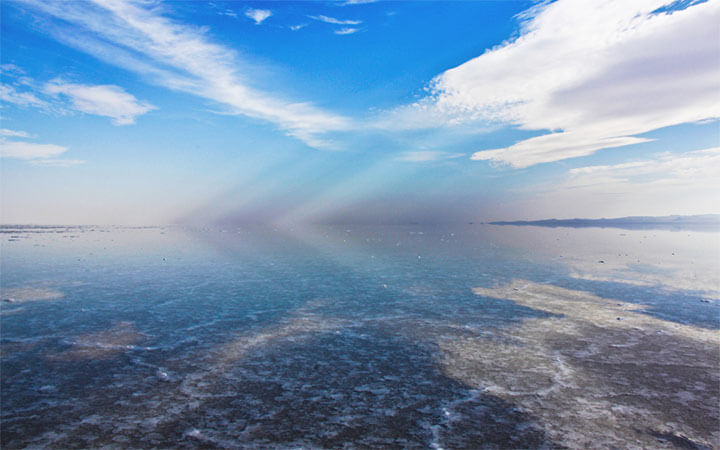 The rainwater killifish is a small, colorful fish discovered in the 1980s in the Great Salt Lake in Utah. The killifish is unique in that it can live in fresh and saltwater and is among the few organisms that survive in the highly salty and alkaline waters of the Great Salt Lake. It has a streamlined body covered in diamond-shaped scales, and flashes of yellow break up its silver color.

This fish is a vital food source for birds and other animals, and its ability to tolerate salt water makes it an essential part of the Great Salt Lake ecosystem.

The brine shrimp is a micro-crustacean, well adapted to the harsh conditions that severely hypersaline environments impose. Artemia is one of the best-known examples of an animal that can live in such environments. Its ability to do so is due to several adaptations. Firstly, artemia has a strong exoskeleton that helps protect it from the high salt levels in its environment.

Secondly, it has a specialized respiratory system that allows it to breathe in oxygen even when the surrounding water is highly saturated with salt. These crustaceans can produce large amounts of glycogen, which provides them with energy when food is scarce. These tiny creatures are well-adapted to living in hypersaline environments, where the salt content is so high that it exceeds the saturation point.

Shrimp are an essential food source for birds, fish, and other animals. In addition, their waste helps to fertilize the lake’s algae, which forms the base of the food chain.

Related: Can You Eat Mantis Shrimps?

These flies have a high salt tolerance and can extract moisture from the air, allowing them to thrive in the desert-like conditions of the Great Salt Lake. In addition to providing an important food source for birds and other animals, brine flies play an essential role in the local ecosystem.

Through recycling nutrients and breaking down the organic matter, the brine flies help to keep the lake clean and provide valuable support for the surrounding wildlife. Brine fly larvae are also resistant to desiccation and can withstand high temperatures. As a result, they can survive in some of the harshest environments.

Algae is a type of plant that lacks roots, leaves, and stems. It is often found in water bodies, which serve a vital role in the food chain. Most algae are single-celled, but some are multicellular and range in size from microscopic to macroscopic.

The Great Salt Lake is home to various algae, including diatoms, green algae, and blue-green algae. These algae help to support the lake’s ecosystem by providing food and oxygen for the fish and other animals that live there. They contain a carotenoid pigment that gives the lake its characteristic pink hue.

When the algae bloom, they can sometimes cause the water to turn a different color, such as pink. Blooms are often caused by an increase in nutrients in the water, resulting from runoff from farms or factories. While algal blooms can be unsightly, they are not harmful to humans or animals.

Additionally, algae play an essential role in the global carbon cycle. They produce oxygen through photosynthesis, and they sequester carbon dioxide from the atmosphere.

Formation of the Great Salt Lake

The Great Salt Lake was formed over 11,000 years ago when a large glacier covered much of North America. As the glacier began to melt, a large body of water known as Lake Bonneville was formed. Lake Bonneville was approximately ten times the size of today’s Great Salt Lake and had a deep, narrow valley that allowed water to flow into the Pacific Ocean.

Over time, the climate grew drier, and the lake began to shrink. As the lake shrank, its depth increased, and the valley became shallower. Eventually, the only outlet for the lake was a narrow gap in the mountains known as Red Rock Pass. As the climate continued to change, evaporation began to exceed inflow, and the lake started to dry up. Today, the Great Salt Lake is a fraction of its former size, but it remains an essential habitat for birds and other wildlife.

The Great Salt Lake is a famous destination for recreational activities such as swimming, boating, and fishing. The salt and minerals mined from the lake are used in various industries, from glass-making to road de-icing. The lake is also a central stopping point for migrating birds, providing a critical resting and feeding ground for many birds each year. The Great Salt Lake serves as the home to the largest inland lake island in the United States, Antelope Island.